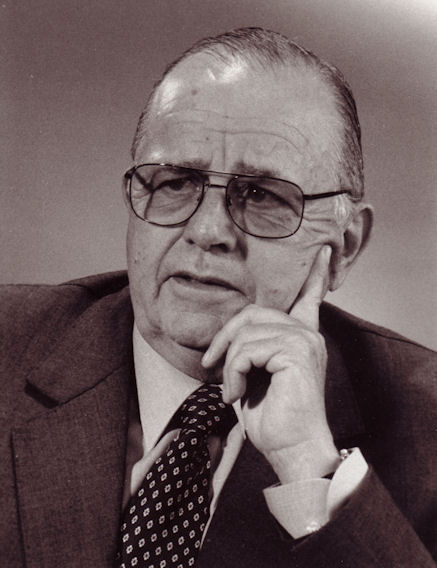 He joins the School of Architecture of Montevideo in 1952. During his freshman year, he takes part in architect Mario Paysée Reyes's workshop. Then he joins architect Carlos Gómez Gavazzo’s workshop -a great master of architecture- where he stays until the end of his academic years. Architect Luis Basil and Assistant Professor architect Ramón González Almeida -among others- were also part of this workshop. The latter gave him guidelines in the fields of creativity, coherence and the importance of structural order. He works in his firm until 1955, when architect González Almeida travels to the USA and then settles in Venezuela. This is when López Rey who is still a student, takes the reigns of Ramón González Almeida’s firm, though he remains professionally represented by the firm of architects Alberto Muñoz del Campo , Enrique Muñoz and Guillermo Gómez Platero . It is in this firm where he starts working on several architectural projects, such as a call for tender organized by Banco Hipotecario. This project was deeply appreciated by architect Rino Levi, juror . Architect Rodolfo López Rey meets architect Paul Rudolph during the latter’s visit to architect Gómez Gavazzo’s workshop in the School of Architecture. Here, he conducts an excellent class. Rodolfo López Rey admires Paul Rudolph for his homes in Sarasota (Florida, USA), published in the Arts and Architecture journal. Other important architects who were his role models during his academic years were: Le Corbusier (Charles Édouard Jeanneret), Walter Gropius, Ludwig Mies van der Rohe, Philip Johnson, Ernesto Rogers, Charles Eames and Harry Seidler.

In 1958, while studying for his last university exams, he is invited by architect Leonel Viera - designer of the hanging bridge over Maldonado stream in Punta del Este - to prepare a draft for Centenario Building , located on Centenario and 8 de Octubre Avenues, in Montevideo. This work was completed by the architect Alfredo Nebel Farini .

He graduates as an Architect by the end of 1959.

By then, having already initiated several works together with architect Guillermo Gómez Platero, he takes part in several projects, such as Finisterre Building on Rambla República del Perú in Montevideo, and Puerto Building in Punta del Este.

Letters of recommendation from architects sent to Mr. Salvatore Cándido, the Director of the Italian Cultural Institute for a scholarship in Italy:

In 1963 he takes up teaching as a 1st year assistant of Isern workshop, held by architect Herrán , at the School of Architecture, and continues working for the firm.

By the end of 1963, the Italian Government awards him with a scholarship and he travels to Europe. He studies at Milan Polytechnic University with Professor Sacchi. In February 1964 he meets Architect Ernesto Rogers in his Milan firm with whom he has an unforgettable conversation. López Rey then visits the Velasca Tower, one of the most singular works in all of Rogers’ extensive career. He resides and works in Milan until the end of 1964. There he meets a valuable Italian cultural group, integrated by the outstanding painter Paolo Schiavocampo and the sculptor Pino Spagnulo , among others.

He is invited to design the reform works of an 18th century palace at Piazzale Baracca de Milano. He also designs a series of apartments and shops at Cinisello Balsamo, a suburban area of Milan. Finally, he designs a project for the same company aimed at the construction of pre-manufactured houses with a metal structure. The assembly parts are built at a car assembly factory. During this stage he creates the Italian fantasies .

At the end of 1964, he is invited by architect Ramón González Almeida , who was already residing in Venezuela, to teach architecture at the School of Architecture of Mérida, Venezuela. He decides to return to Montevideo, but before doing so he travels to several cities in Spain, France, Belgium, the Netherlands and Germany. In this last country he visits the Ulm School of Design and meets its director, Tomás Maldonado . He could not forget the intellectual and monastic climate that reigned there. Later, when in Switzerland, he tried to meet with Max Bill , founder of said school, who at the time was not in Zurich. He ends his journey revisiting Italy and finally Greece where he stays for over a month visiting Athens, Mykonos, Santorini, Delos, Paros and Crete.

Back in Montevideo, in 1965 he returns to the firm and continues teaching as an assistant professor at architect Herrán's workshop, in the School of Architecture. There he reencounters his students from 1963, who are now in 3rd year. Prominent students: Enrique Cohe, Roberto Alberti, Oscar Corlazzoli, Juan Elbio Nicola, Armando González and Julio Bazzano , among others.

Since his trip to Italy in October 1963 and until his return in early 1965, architect Alfredo Rudich temporarily joins the firm, invited by architect López Rey. During this period, the construction of Poyo Roc Residential House is finished.

Since 1965 the firm starts developing a new plastic arts expression that leaves aside, at times, its initial structural language making way for strong, white architectural volumes. This language was influenced by the Mediterranean culture of Southern Italy cities such as Ostuni, the Greek islands, Santorini, Mykonos and various cities in Andalucía. Thus, the firm is in search of a new language, which finds its reflection in many residential houses as well as in some buildings built in Punta del Este and Montevideo, namely:

The buildings El Fortín, Paz Marina, Arrecifes and Yacht, as well as many residential houses especially reflect this architectural language. They continue using exposed reinforced concrete in a significant series of works developed thanks to accountant Luis E. Lecueder’s enterprising talent. This series starts with Berna Building in 1969, which precedes the creation of SAFEMA (Sociedad Anónima Fomento Edilicio de Maldonado - Maldonado Building Development Corporation). The main reason for the success of SAFEMA was its incorporation and integration; a group of friends from different fields. As the Chair, Luis Lecueder, who did an impeccable job running the company, was supported by the management of the López Rey - Gómez Platero Architects firm.

Luis E. Lecueder , accountant, was the true creator of the SAFEMA (Sociedad Anónima de Fomendo Edilicio de Maldonado- Maldonado Building Development Corporation) structure. Together with his talent, commitment, optimism, integrity and outstanding professionalism he accomplished important investments during complicated financial times in Uruguay. As a consequence, thanks to his important and memorable administration, so many high-quality buildings were erected in Punta del Este and Montevideo. We were fortunate to be able to walk by his side during those long and unforgettable years. Sadly, he left us too soon, although his son, Carlos Alberto Lecueder , was able to carry on so many new and high-quality buildings with the same conditions he still brings to the table today.

Then, the three most prestigious, longstanding and excellent real estate companies in the area, Gattas, Sader y Paullier , start participating. A triangle of excellent professional management was consolidated. First, there was a tender for the reinforced concrete works, starting with the electrical and sanitary installations. Then there was a tender for masonry work with the same company or a more convenient one. After that, all subcontracts which had to be involved in the process at a strict time were written. The firm approved payments, if required, according to the quality of work and timeliness thereof. The Lecueder firm received this information and immediately, after checking, payments were made. The construction company did not manage the funds. They went directly to the subcontractor or supplier. This allowed those involved in the work to promptly receive the money for the finished work. This ended with the tradition that involved the main company receiving the total amount of certificates. As a result, SAFEMA earned a solid reputation in Montevideo and Punta del Este, which enabled it to do a great number of works. The apartments were always ready within the agreed time.

This period sees a return to a structural expression and to the use of reinforced concrete as a plastic expression. During this time, architects Enrique Cohe –in 1973- and Roberto Alberti –in 1976- join as members of the firm. At first, architect Enrique Cohe collaborates by managing the construction works in Punta del Este. Then, he enters the project area, while architect Roberto Alberti works as an important collaborator in the area of budgeting, management and administration of the construction works.

In 1976, after Berna Building was finished, López Rey travels to Europe and reunites with the painter Paolo Schiavocampo and the sculptor Pino Spagnulo , important figures of Italian painting and sculpture. He then travels through Italy, France, Spain and Greece.

The following construction works were carried out together with SAFEMA :

In 1975, Goar Mestre - an important Cuban businessman, formed in the USA and founder of important media companies in La Habana, Caracas and Buenos Aires- starts working in SAFEMA as a financial partner. His participation was fundamental for achieving perfection in many details of our projects. He had a great relationship with accountant Luis Lecueder and our firm. Partly because of his intervention, the four Malecones were born.

During his last working years they had excellent collaborators, such as Architects Arturo Villamil, Tomás Sprechman, Enrique Benech , and lastly, Marta Arjona .

Other works in Montevideo:

While trying to restore his health, he starts working, for a period of time, first with Luis Cano (B.A.) and then with Leo Ravera (B.A), with the assistance of Mr. Eduardo Mazzeo (B.A.) and Ms. Gabriela Benítez (B.A.).

In the meantime, he works independently in Buenos Aires with architect David Fuks in the renovation of an old building from early 20th century to build offices and shops in the corner of Callao Ave. and Arenales Street , He also takes on some minor tasks in the branches of Banco Holandés of Buenos Aires aiming to enhance and update its functionality.

In his last works he has the assistance of architect Leo Ravera, Eduardo Mazzeo and Gabriela Benítez . It is in this moment when he begins a colorful period that was lacking in the grey urban culture of Montevideo city.

He concludes his professional career with the following works with Novino Construction company:

Since our teenage years, accountant Alberto Veiga De Cicco and I have been great friends. Afterwards and up until this day I am close friends with accountant Daniel Veiga Dobrich, a great friend and professional who always stood by me through thick and thin and who will stand by me until we reach the end of the road.

Finally, I have to point out how important the company of my wife, Lea Verdesio Salvo , was both for my life and work since 1961. She stood by me for so many years accompanying me in all my works in Montevideo, Punta del Este, Italy and in all our long trips. 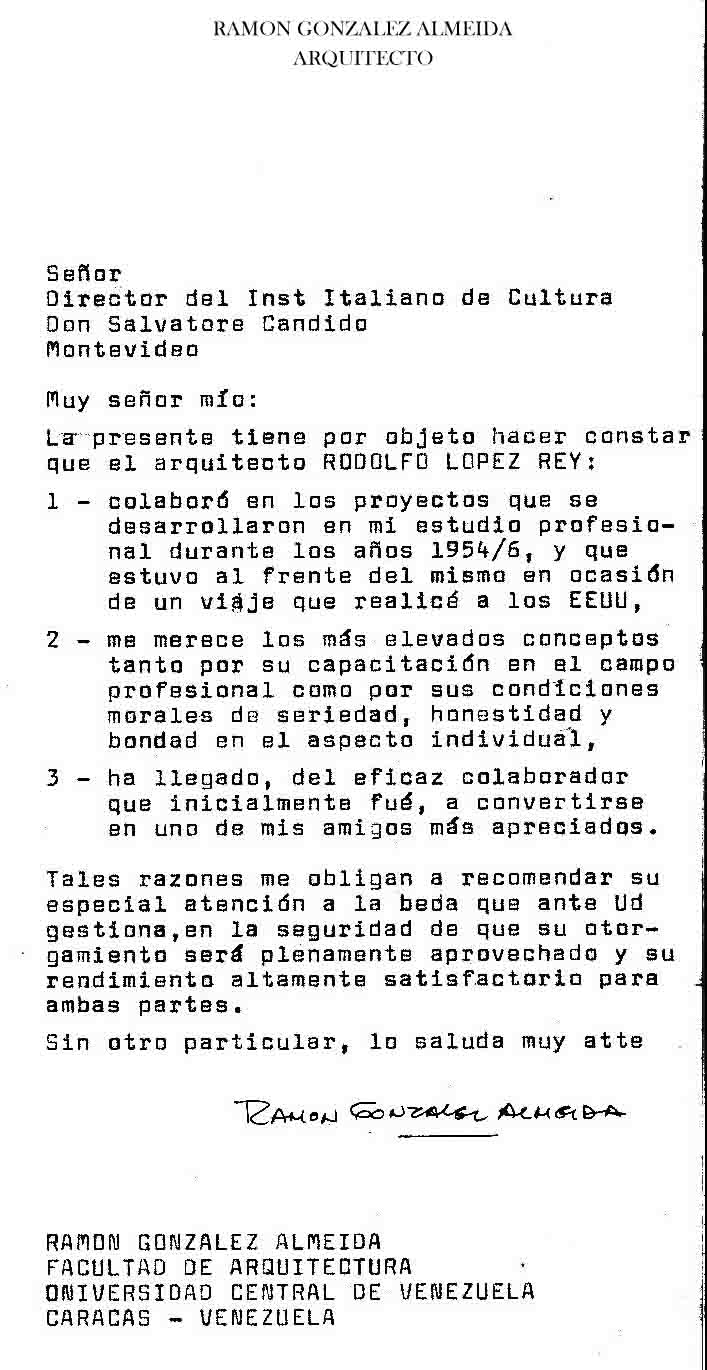 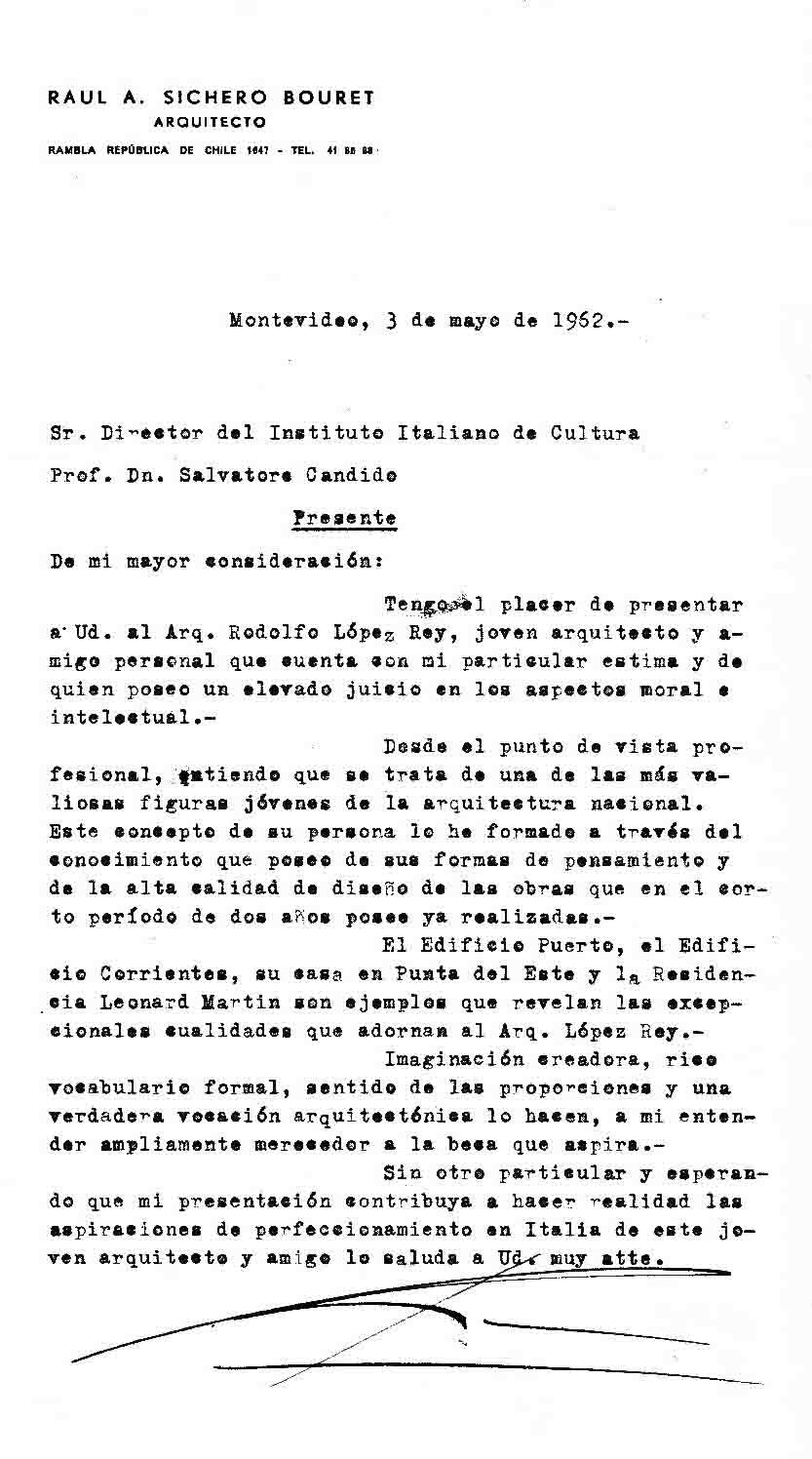 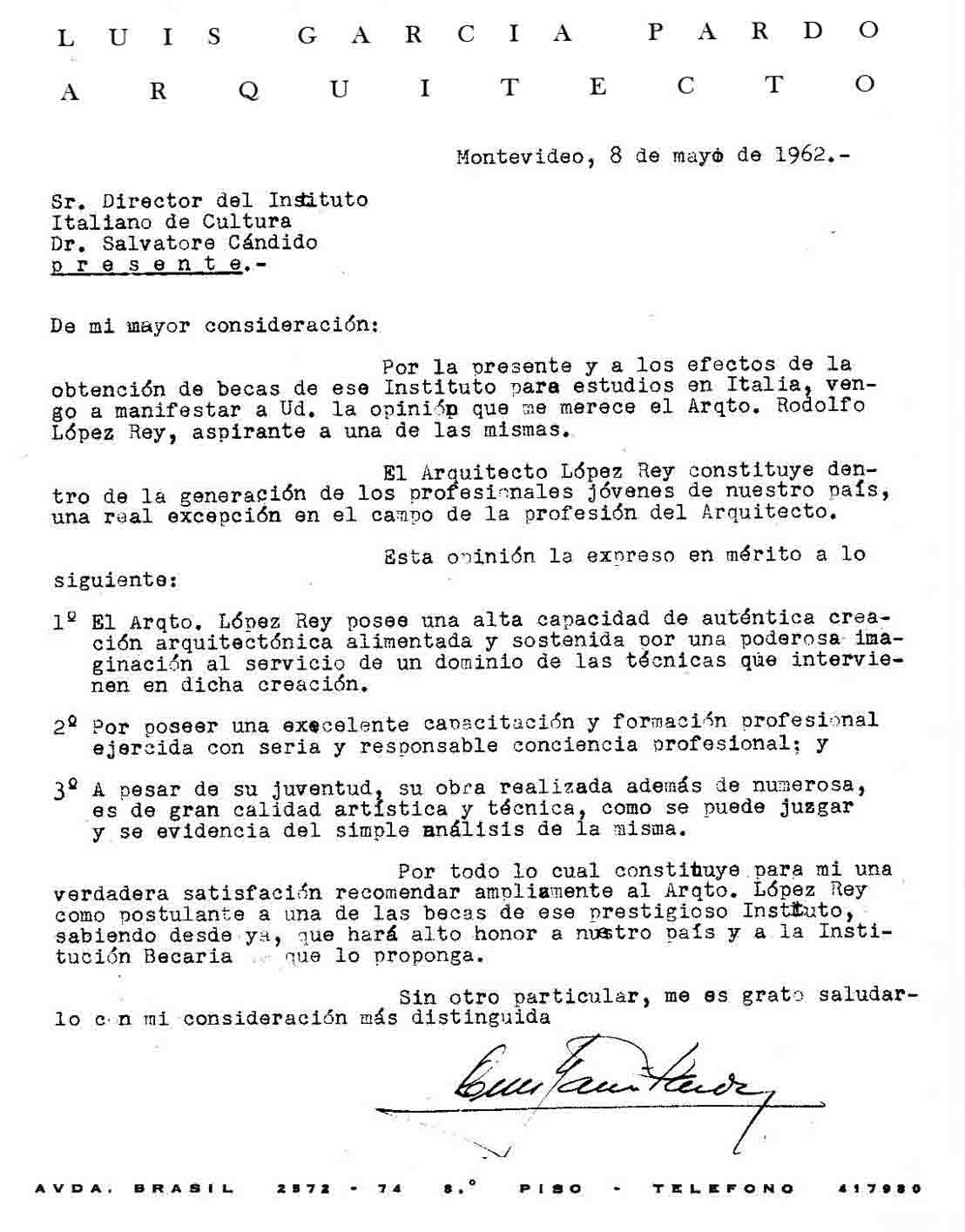 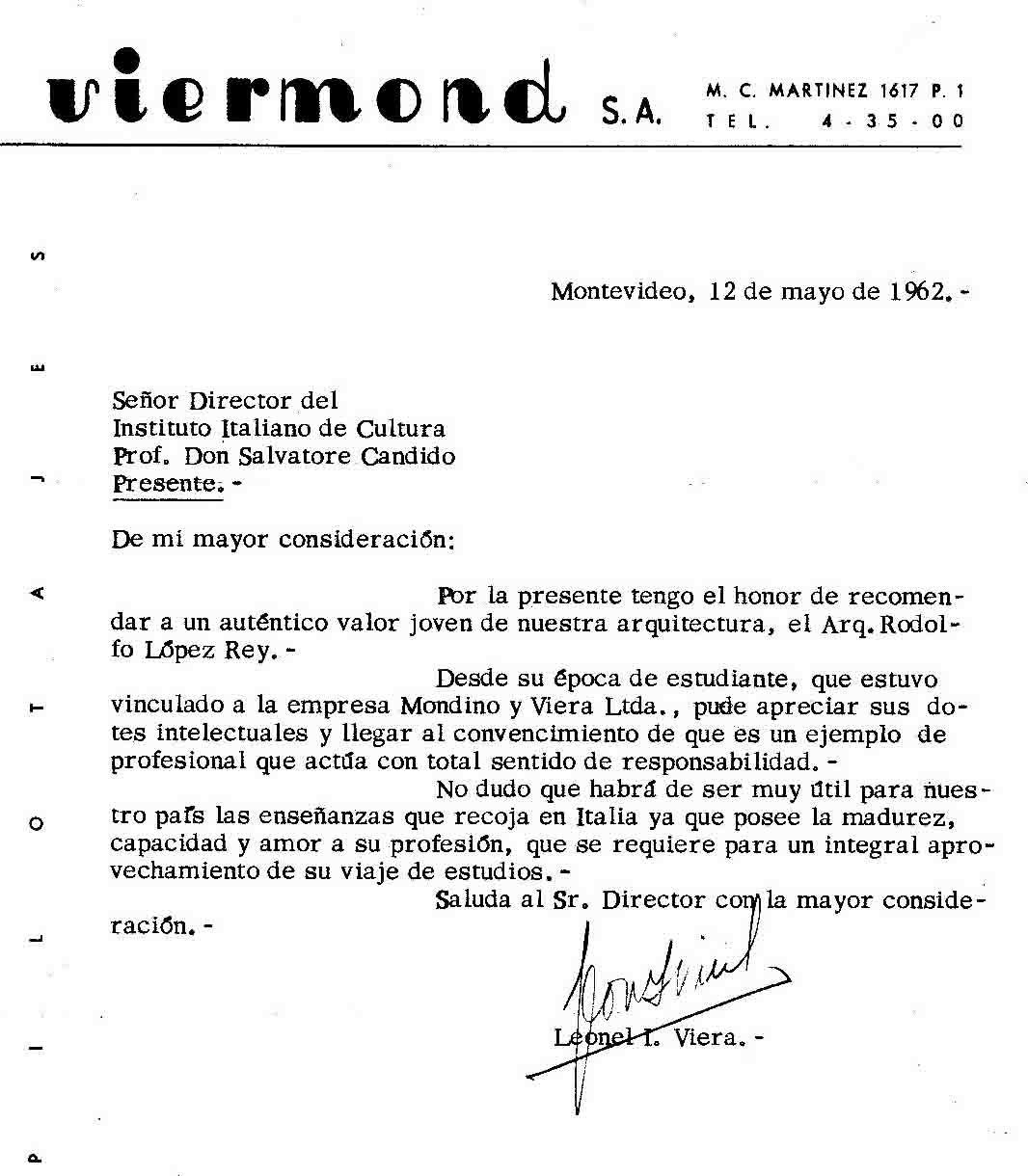 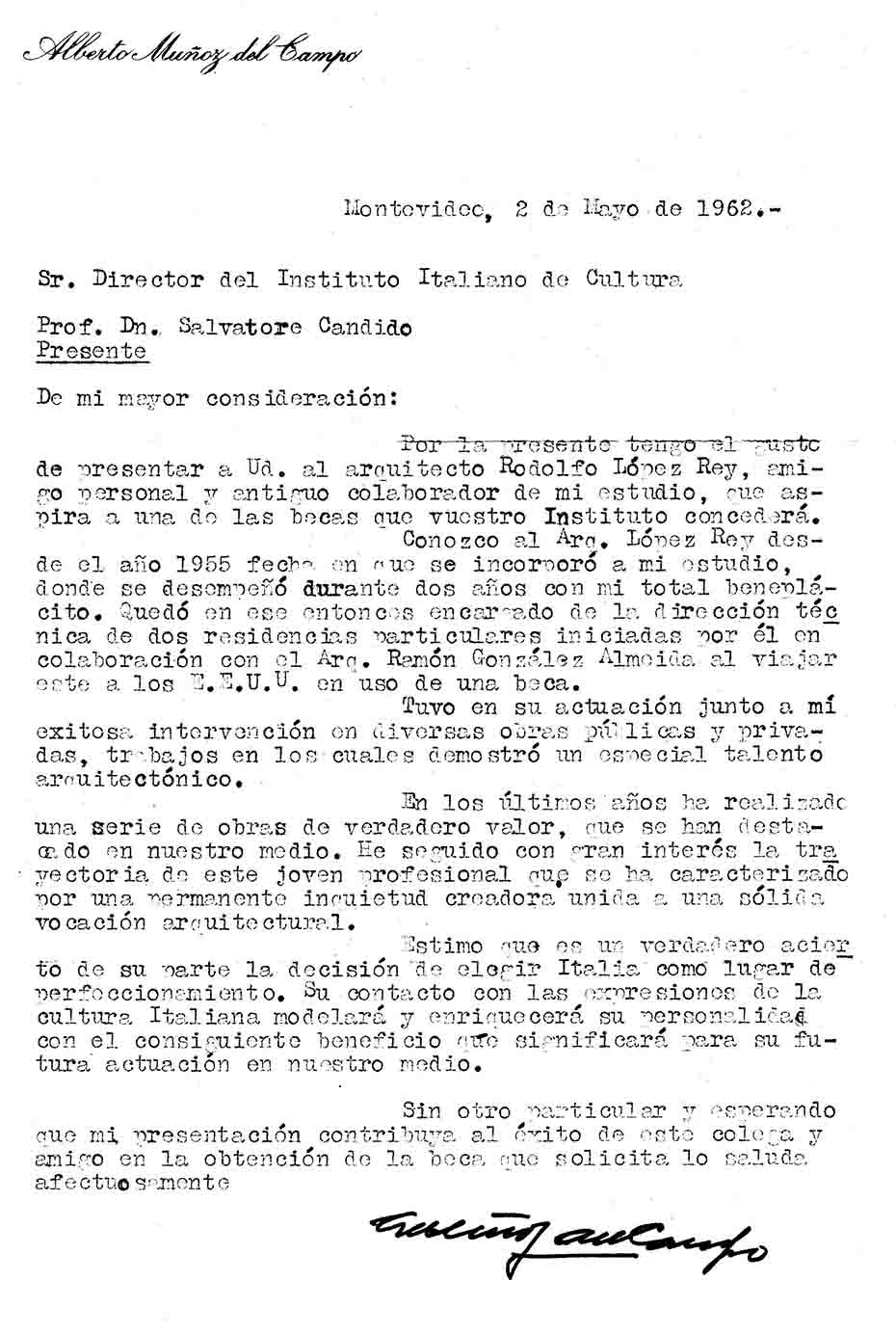 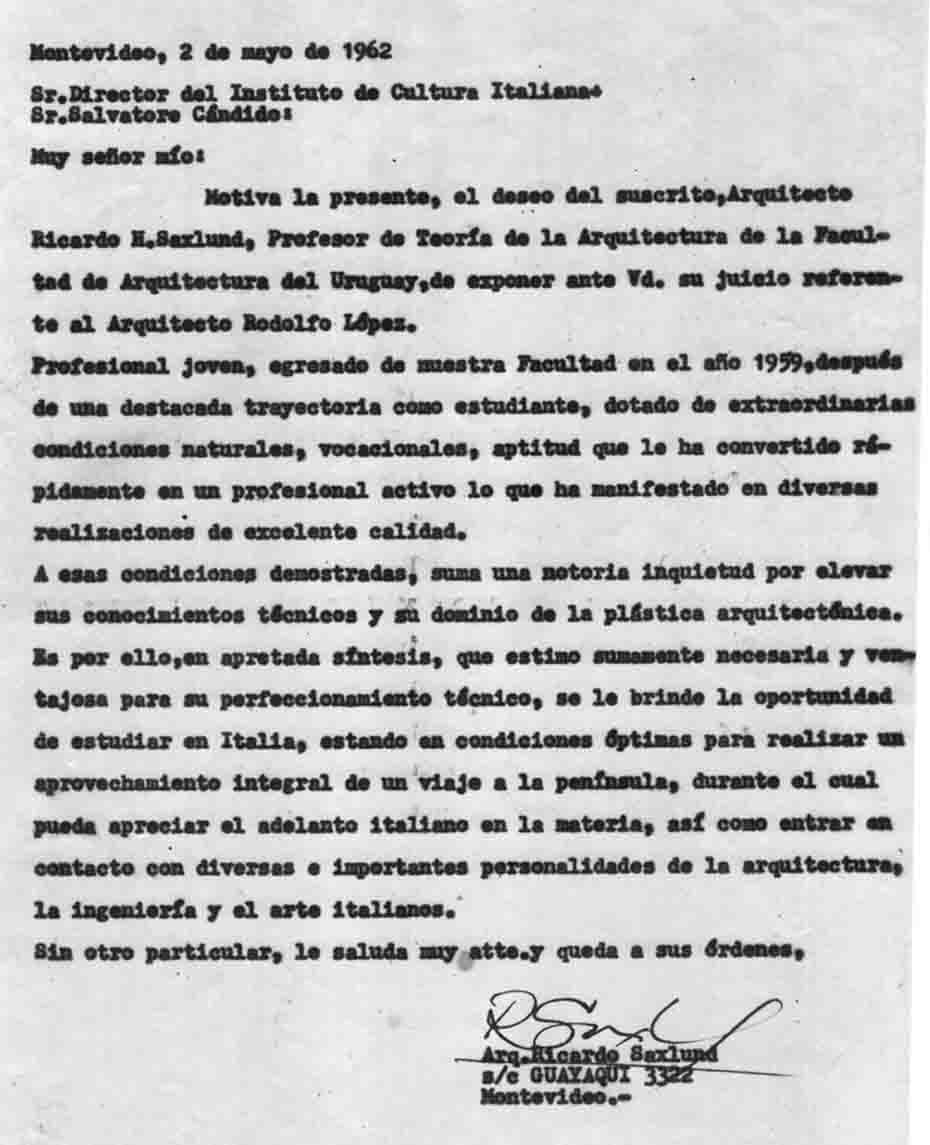